The editor-in-chief of "Unsolved crimes" newspaper has been attacked 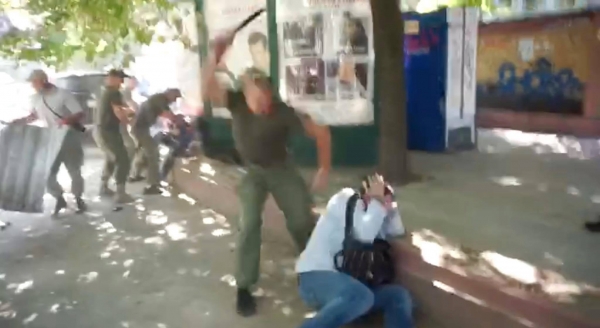 There was an attack on Constantine Slobodyanyuk the editor-in-chief of the "Unsolved crimes" newspaper on July 13, 2018 at about 10 AM. At this time, the journalist was on Nekrasova street 1, where the day before there had been a conflict between representatives of the municipal guard and employees of the “Redut” law company. According to the informant from the network of the Department of Municipal Security, the representatives of the municipal guard were to return the next day and dismantle parking posts, which were illegal in their view.

Everything happened in about 10 minutes. Three cars belonging to the municipal guard arrived at Nekrasova street in the parking lot. All in all there were about 15 people who got out of the cars. All of them were dressed in a uniform with chevrons labeled "Municipal Guard". At the same time, from the direction of the main department of architecture and from the opposite side along Nekrasova street, two more groups of 10-12 people in civilian clothes began approaching the parking lot. Without showing any documents the representatives of the municipal enterprise  "Municipal Guard" began dismantling the parking lot posts. At this time at the parking lot there were two of my colleagues from “Obshestvennyi Priboi” newspaper. They were interviewing employees of the “Redut” law company. As a matter of fact, within a few minutes the representatives of the municipal security began using special means in the form of tear gas. Afterwards, they began kicking the employees of the “Redut” law company right in front my eyes. At that moment I attempted to stop the illegal actions of persons whom I didn’t know, having introduced myself as a journalist. After a few seconds, from two sides, the employees of the municipal enterprise "Municipal Guard" used tear gas against me, followed by several strikes with clubs on my head to the temple area; they threw me on the ground and inflicted several more strikes; by that time I didn’t see anything and practically couldn’t  hear anything

In response to this offense, the issue at stake is opening the criminal investigation under Part 2 of Art. 345-1 (threat or violence against a journalist) of the Criminal Code of Ukraine. It is also worth noting that during the conflict, there were two other journalists of “Obshestvennyi Priboi” newspaper - Vitaly Tkachenko and Miroslav Bekchiv - who were injured by the municipal authorities. One of them is in the hospital with a closed skull fracture, face burns and traces of strangulation. It should be reminded that the municipal enterprise "Municipal Protection" is under the immediate supervision of the director of the Department of Municipal Security - a retired police colonel Viktor Kuznetsov. Wherein, superintending officer of the municipal enterprise "Municipal Protection" is another official from Odessa Andrei Kotlyar, who is the deputy head of city chairman Gennadyi Trukhanov.